Using the wave forecast to predict the weather

For a quick look at wind and weather conditions, check the waves. 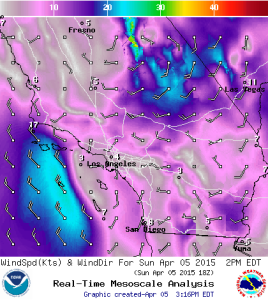 Swell Matrix’s detailed swell forecast can give you hints as to what the weather will be like in the next week. Though you won’t likely be surfing them, waves with periods less than 6 seconds are shown on Swell Matrix. These are created by local wind and only travel a short distance before dissipating.
Strong winds from the ocean equal what meteorologists call onshore flow and create morning and evening marine layer clouds, cooler temperatures and wind. If offshore flow is forecast on the West Coast, you may see small short-period waves from the east or northeast. Local winds in Hawaii and the East Coast also create waves that can be seen on the Swell Matrix forecast.

In Southern California, strong winds blow west of Point Conception and create northwest wind swell that varies in period from 4-12 seconds and from a direction of 275-330. When you see waves like this in socal, the wind will likely pick up mid-morning and not die down until sunset- the afternoon session will be blown out. Sometimes this wind will create an eddy, meaning the wind wraps back along the coast from the south or southeast. Buoys in the area will show small short-period waves from the south in addition to the northwest.
When there’s an eddy, you’ll want to keep a close eye on local winds: the eddy can cause offshore winds in some areas while other spots will be blown out at dawn.
Helpful Links:
Southern California Current Wind Observations
Journal Article on Catalina Eddy